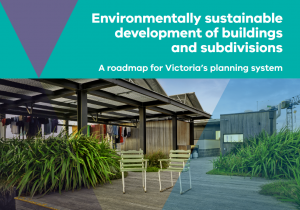 They are attached here: DADA ESD response to Darebin Council

DADA will continue to advocate for the protection of Preston Market on it’s current footprint. We do not believe and have not been shown any evidence that the market can be saved by moving and rebuilding it.

Below are the last set of questions and answers from the general council meeting on December 7th 2020.

Note the spin; council continue make ingenuous claims that they support the continuation of the market on the “site” not on it’s current footprint.  They also claim to want to protect significant heritage features but not on the current building or footprint.

New to council’s response is the palm off to the state government.  Happy reading! 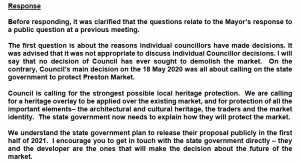 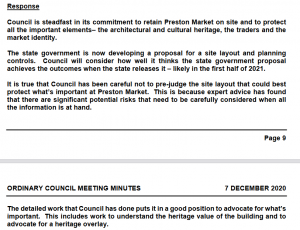 Save our Preston Market

Only if a council officer says I can..

The decision of the DADA and Save our Preston Market Heritage Register application was published on the 18th of September.

We were not successful in proving the statewide significance of the market to achieve a listing on the register but the Heritage Council Victoria did make make a recommendation to local council and/or the state government to apply a heritage overlay.

You can read the final determination here:

There have been articles in the Leader:

At the council meeting on Monday the 14th of October community representatives made the following submissions:

Council has been roundly criticised by the Heritage Council of Victoria for its ‘disjointed’ approach and handling of the Preston Market.In their numerous recommendations, Heritage Council Victoria notes that Darebin Council in its submission did not include a Heritage Study that it commissioned by ‘Context’ in Dec 2017, nor 2 reviews of that study.Community supporters of Preston Market concur with the experts on the Heritage Victoria committee. And together with the architects presentation given last week, we believe there is an increasing and compelling body of information for all Councillors to make an evidence based decision to push for a Heritage Overlay as one of a raft of measures to protect the market.Should it be determined that more work needs to be done, then the next step should be to request an Interim Heritage Overlay as Minister Wynne did previously.It’s time for Council to act on behalf of the ever growing number of concerned community members. Chris Erlandsen

The State Heritage Council recently, in its Report, recommended that our Market strongly warrants a ‘local heritage overlay’ which seemed to contradict council’s prevarication on this issue.   The protection of the Preston Market is paramount in our community we have been fighting for several years now to protect it.  For over 2 years, we have sought Heritage protection. The community do not believe that they have had the genuine support of some councilors to achieve this goal.We elect councilors for two reasons, one to show leadership, the other to ensure that community requirements are met as often as is possible.Councils are advised by non elected bureaucrats whose role is to establish how community needs can be met.   If councilors believed a heritage overlay could help our market and bureaucrats do not, then it is incumbent on our elected reps to tell the bureaucrats to reassess, aft all.  Council’s parking strategy was rejected by the community and was withdrawn, this is called democracy.The Heritage Council, while rejecting state significance, in its Report, clearly and decisively over and over recommended a local heritage overlay being warranted, and clearly recommended that Council endorse and act on this.  Council, at its last meeting rejected this.  The question the community wants answered is why?  Why have we had to try and drag council, kicking and screaming to support a local heritage overlay which has been obvious to the community for over two years?  Will they recognize that this is a significant way to protect our market and will they now admit the community were correct and get behind us or be condemned by the community for refusing to take every possible step to save our Market?
Marion Harper

The Preston Leader has the following article on their Facebook page. Happy reading.

At the planning committee meeting last night the majority of Darebin Councilors voted to effectively demolish Preston Market in favour of moving and rebuilding it, even though the most recent report commissioned by council says that the key attributes of the market cannot be preserved in a new building at a new site.

In consideration of a recommendation authored by the Coordinator Strategic Planning, amendments suggested by Councilor Greco to preserve the current market on the current site were rejected.

Representatives from community groups, DADA and Save our Preston Market, gave two minute presentations on the significance of the building fabric and the living cultural history embedded within it.

There was a third invitation made to council for a briefing from the original architects on the aesthetic and technological significance of the old market buildings.

DADA believes there are ethical concerns when council is willing to take a briefing from developers but will not hear from the original architects.

You can watch the debate here:

You can read the final recommendation in the minutes here: http://www.darebin.vic.gov.au/Your-Council/How-council-works/Meeting-Agendas-and-Minutes/Council-Meeting

Next meeting date Tuesday 13 April 2021 7pm-9pm via zoom. All welcome. Contact DADA at Dada <darebinada@gmail.com> for a link … END_OF_DOCUMENT_TOKEN_TO_BE_REPLACED 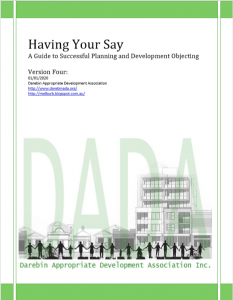 Having Your Say A Guide to Successful Planning and Development Objecting Is designed to guide readers through the process of objecting to planning and development proposals at local government and Victorian Civil and Administrative Tribunal (VCAT). It includes pages and appendix documents of strategies and ideas used to produce successful outcomes and shared by DADA folk with many years … END_OF_DOCUMENT_TOKEN_TO_BE_REPLACED