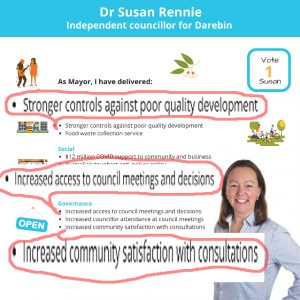 Development controls are administered by the State Government, as the council keeps telling us.  This Councillor has not delivered State planning controls.  She also voted against a local heritage overlay to protect Preston Market from being demolished, moved and rebuilt on the site a specific instant of voting against support for quality planning controls.

Dispute the claim of increased access to council meetings, statistical analysis shows that the number of Planning Committee Meetings were reduced to nearly half of the number during the last council term.  72 meetings for the 2012-2016 council compared to only 40 for the 2016-2020 council,  having public oversight of only 95 planning applications as compared to the 394 of the previous council.

As Mayor, Cnr Rennie has delivered a reduction in community submission time at Planning Committee Meetings.

DADA has not seen data to back up the claims on community consultation.  We note that though we asked twice, at council meetings, when the new planning governance rules, the ‘call it in’ process would be evaluated we were not consulted on the eventual review which happened this year and which was listed for only two weeks on the council website.