It has literally been woman, children and senior citizens who have repelled every attempt to cut the tree down.  In the last attempt the tree choppers were intimidating us.
Though we now have our community scaffolding erected, a quick surprise attack could substantially destroy the tree within an hour.

TO THE POLICE – WE SAY ENOUGH
Enough of Ken Kang snapping his fingers and police doing his beckoning! – see photo
Ken Kang should spend some of his own money and take us to court to get an injunction to force us to move from our own property while the tree gets cut down.
At least that way he and the tree choppers will do it in the full glare of whatever publicity we can muster rather than through his shameful sneaky tactics with the police in tow.
Please contact Preston Police 9479 6111 and tell them to tell Ken Kang to get an injunction!

WorkSafe refuses to attend saying that we should protest from a safe distance.  As the tree choppers dangle above us with their chainsaws, they tell us that WorkSafe doesn’t matter – see photo

No!  Why should WorkSafe be supporting Ken Kang?  We are members of the public exercising our legitimate right of protest!
Please contact WorkSafe (Lisa_Sturznegger@worksafe.vic.gov.au) or phone 1800 136 089 (toll free) and tell them to tell Ken Kang to do the job safely! 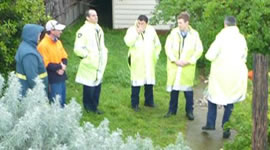